Description: During this event, players need to challenge and defeat different levels of Udor  to receive a lot of great rewards.

Which Runes Should I Be Obtaining During Karuak Ceremony?

This is because when you summon the neutral units for the event, you are going to gain some experience points by defeating them.

So it is crucial for you to obtain a commander XP Buff Rune to maximize leveling up your desired commanders.

Also, at each incremental level of 10 (Elite levels), the XP reward is significantly increased.

Which Commander Should I Use?

Not just because he has the Lohar’s Trial skill that increases the amount of XP you could get as you still can get benefit from it when he is the secondary commander.

The real reason here is because of his talents!

First we have Insight, the talent that reduces the action point cost when you attack any neutral units.

When you send Lohar with this talent Insight available, it is going to reduce a lot of the action points when you do a consecutive attack.

Also you also get 15% more XP points by having the Quick Study talent.

If we add this up to the the Lohar’s Trial skill, it is going to increase the XP gained massively.

Lohar also has the Trophy Hunter talent, which gives you 15x

lvl.1 Resource Pack C after every time you defeat a Barbarians or a Neutral Unit.

In addition, Lohar has the Rejuvenate and it’s going to be able to cast the healing skill a lot quicker. And then we have the Elixir as well, which is is crucial so that your healing effect gets increased a lot. Your troop is going to be able to last a lot longer in the battlefield and that’s going to affect your consumption of action points as well.

Should I Use Any item Boost? 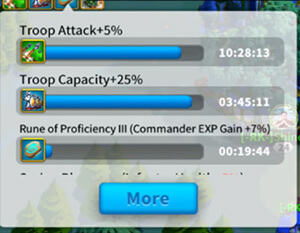 You should use the Troop Attack Boost and the Troop Capacity Boost.

This is because as you get farther in Karuak Ceremony, the enemy gets a lot more difficult. So having these offensive buffs is going to really help you out.

You can either use the 50% Capacity Boost one, which is the advanced.

Using these boosts is going to help you out with the action points as well. The reason is that the more the troops you have the longer and the stronger your army is, the longer you can last in the battlefield, the less action points you need to spend.

Latest From Rise of Kingdoms